What is the difference between industrial & commercial PCs? 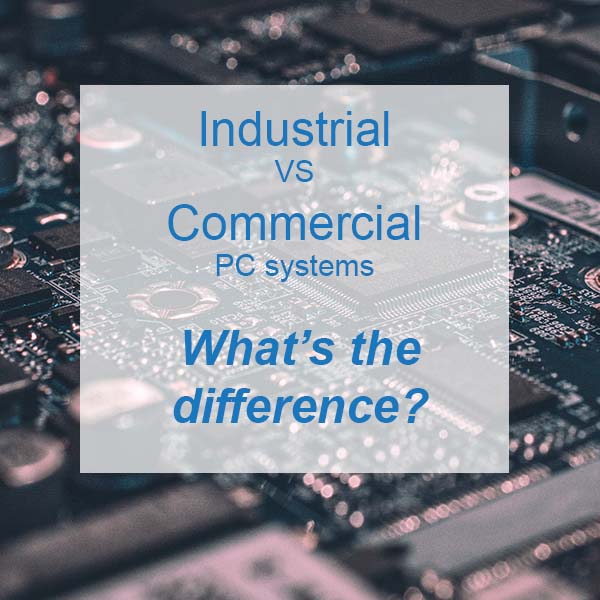 Industrial grade embedded PC Systems are designed for use in environments where commercial grade PC Systems are not suitable. This is the case for a variety of reasons such as reliability, 24/7 operation, longevity of supply, sufficient thermal dissipation, extended temperatures of operation, weather extremes, poor power supply, support and serviceability.

It is often very tempting for Embedded PC System specifiers to see the chance to make cost savings by using commercial grade PC systems. This is a short sighted view as it ignores the reasons discussed here. Our industrial grade Mini-ITX for example look similar to their commercial counterparts which have been designed down to a price rather that for long term performance and reliability.

Differences in delivering commercial VS industrial

How many times has a new office PC been delivered only for you to discover that it is completely different from the one you received a few months previously? This may not be a problem in the office environment but can cause serious issues in an industrial environment or where a larger product has been designed around it.

Commercial PCs are generally not intended for 24/7 operation and may therefore have a limited life expectancy. The failure of commercial grade PC systems can cause problems in the field as they are often installed in inaccessible locations or deeply embedded inside a machine of some type. It then becomes an expensive problem when service personnel have to be sent out to effect repairs or replacements.

High grade materials are used in the construction of industrial grade systems which are hardwearing and do not degrade over time. By comparison commercial grade systems typically use plastic and thin metal which are not robust enough for the harsh environments where the systems are often used.

Industrial grade PC systems can often be specified as a sealed system to allow them to be used in difficult environments such as outside or in damp locations. The systems still need to function in these situations across a wide range of temperatures.

What should be considered?

Longevity of supply is also an important factor particularly when considering the longer term support of deployed systems. Many applications do not allow for the constantly changing specifications of commercial grade PC systems. Some OS software images cannot tolerate the hardware constantly changing and may fail to deploy or function correctly. Most industrial grade embedded PC systems have an availability and support for 7 years or more which is far greater than the usual 1 to 2 years for commercial grade PC systems. This allows a longer system design lifecycle which reduces the overall project cost over the lifetime costs of the project.

What Are The Main Advantages of Power Over Ethernet (PoE)?Mar 24, 2020